The Student Prints • May 6, 2015 • https://nvstudentprints.com/247/news/rao-wins-franklin-b-walter-all-scholastic-award/ 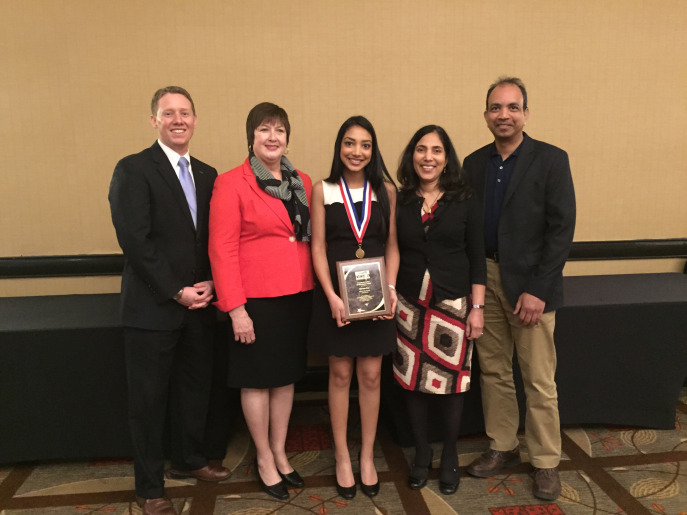 Senior Geeta Rao has continued her string of excellence at Northview with her recent nomination of the Franklin B. Walter All-Scholastic Award. This achievement was created by the Ohio Superintendent’s Educational Service Center Association (OSESCA) to recognize outstanding students and promote student success.

In order to receive this award, there are certain qualifications. First, the student must be a senior from a school within one of the 88 counties in Ohio. Second, the student must show evidence of excellence in the classroom and in the community, according to Guidance Counselor Kate Henk.

Prior to getting the award, Rao had to send in an application that required her to discuss her academic honors, extracurricular activities, ACT/SAT scores, and show her high school transcripts. There was also an essay she had to write, the topic being about her goals for the future. One student from every public school in each separate county applies for it but only one student from each county becomes a recipient of the award, according to Rao.

Here, faculty made a list of possible students to apply for the award and ultimately chose Rao.

“We knew her comprehensive portfolio would be competitive in any level whether it be county state, or national. What she has taken on and accomplished in these past four years is very rare,” Henk said.

The OSESCA scores each section of the application out of five and then tallies up the score to give it to the most deserving student, according to Rao.

On April 15, Rao traveled to Columbus, Ohio to receive the Franklin B. Walter Award and brought along her parents and Principal Steven Swaggerty. There, each student from their respective county ate lunch and was asked to go up in front of everyone and say their current school name, county, college they plan to attend, and future plans, according to Rao.

“It was very interesting to see all the different people and the amount of diversity there was not only in students but also in future plans, colleges, and the majors everyone talked about,” Rao said.

On top of having lunch in Columbus, Rao was given a plaque, medal, and $200 scholarship to go towards her books next year.

“I am very happy that I was given the opportunity to get this award and I am honored especially because of all the inspiring students I was around at the banquet,” Rao said.